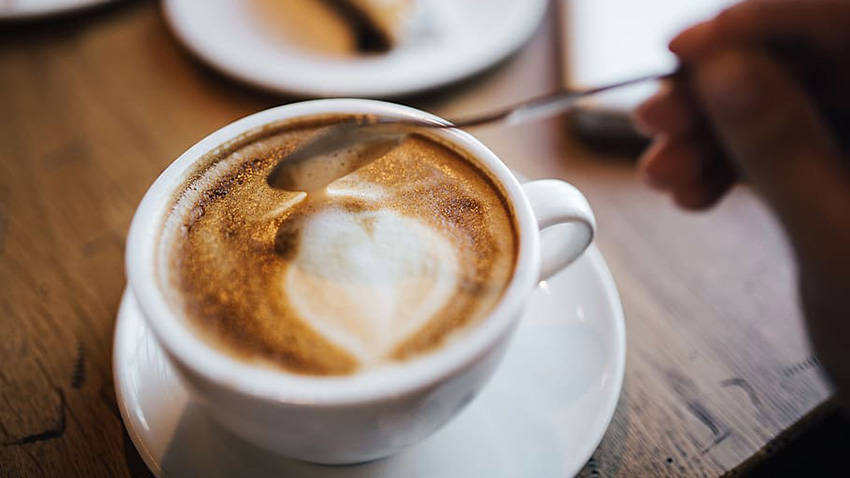 Starbucks has been embroiled in controversies from inappropriate staff manners to price hikes. Whether it will retain the lead in the Chinese coffee shop market remains a heated discussion. Meanwhile, domestic chains such as Luckin, Seesaw, and Manner have seen rapid development and gained financial injections from investors.

As the industry has become more competitive and sophisticated, leading high-end players are also diving in like Blue Bottle Coffee, which opened its first store in the mainland last month. Given such developments, how did this vast market come into being? And how have luxury brands leveraged this opportunity?

In 1999, Starbucks opened its first Chinese store in Beijing. With the goal of building its brick-and-mortar outlets as “The Third Place”(Starbucks is a third place between home and the workplace where people can relax), the company ran at a heavy loss for nine years in China. After much time and effort, it has managed to establish a high-end and professional image in China, and retain its leading position in the country’s premium coffee trade.

While the mainstream had remained untouched until Starbucks’ Beijing debut, the brand Luckin played a significant role in warming up the coffee sector and making the drink a habit around the country. Since 2018, Luckin has focused on its store expansion and consumer subsidies. Declaring its intention to “educate the market with 1 billion CNY” ($157 million), the retailer has successfully become the number one alternative to Starbucks.

In this, Luckin has done an excellent job. According to Euromonitor, in 2018, the average consumption per capita in the Chinese mainland was 4.7 cups. This number rose to 9 in 2021, as reported by Deloitte’s White Paper on China’s Fresh Coffee Industry. More importantly, in the first- and second-tier cities, where the drink has become a habit for many, an average of 300 cups of coffee are consumed per year, which is as many as those in a more sophisticated coffee market. Coffee is no longer just trendy — it’s a part of the daily routine.

With changes in the diet of Chinese consumers and the increasing popularity of the beverage, the local coffee business is now experiencing accelerated development. According to iiMedia Research, the industry was worth $60 billion (381.7 billion RMB) in 2021, with an estimated 27.2 percent yearly increase. In 2025, the market value is expected to reach $157 billion (1,000 billion RMB).

Last month, Blue Bottle Coffee, also known as “the Apple of coffee,” officially entered the Chinese arena. According to local media, on the day of the opening, people were spending as long as six hours queuing, while scalpers were reselling a $6.5 (42 RMB) iced latte at $15.7 (100 RMB).

As a pioneer of “the third wave coffee” (which refers to a movement in marketing that emphasizes high quality), Blue Bottle Coffee will inevitably find itself facing competition with the artisanal brands that have been in the mainland for years, including % Arabica, Peet’s, and Starbucks. Their target customers: loyal coffee lovers who are less price-sensitive and attach great importance to the quality of beans and coffee house vibes.

And then there is an altogether different group of consumers — those who simply cannot live without it.

Modern city life means that most young adults find themselves in need of caffeine first thing in the morning. In the first- and second-tier cities that used to be ruled by Starbucks, their concept of “The Third Place” has been taken over by other coffee houses or commercial spaces.

“The fast-paced lifestyles, the pressure from work, and the convenient food delivery service of the big cities in China have led to the white-collar’s demand for the cost-effective, grab-and-go coffee,” said Amber Wu, marketing strategist at Emerging Communications. “As a result, domestic coffee companies like Manner came into being and became popular.”

In 1998, Armani opened its first Saint-Germain Emporio Armani Caffè & Armani/Ristorante, making it the first luxury fashion label to tap the drink. Not long after that, brands such as Louis Vuitton, Dior, Chanel, and Gucci jumped into the business, opening cafes around the world.

In China, in addition to opening coffee shops such as The Tiffany Blue Box Café and Burberry Thomas’s Café, high-end fashion brands tends to create pop-up shops and events to engage with its consumers — particularly in the post-epidemic era — many of which involve coffee. For example, Prada landed its pop-up store “Prada Garden” at Jiya Gathering, a coffee house on Wukang Road, Shanghai, and Louis Vuitton turned the Yuyuan Shopping Center (which houses cafes, art galleries, and fashion stores) into a pop-up store. In addition, while releasing its winter sports capsule collection, FENDI presented its new pop-up space and FENDI CAFFE at Changbaishan International Resort, a skiing destination located in northern China. 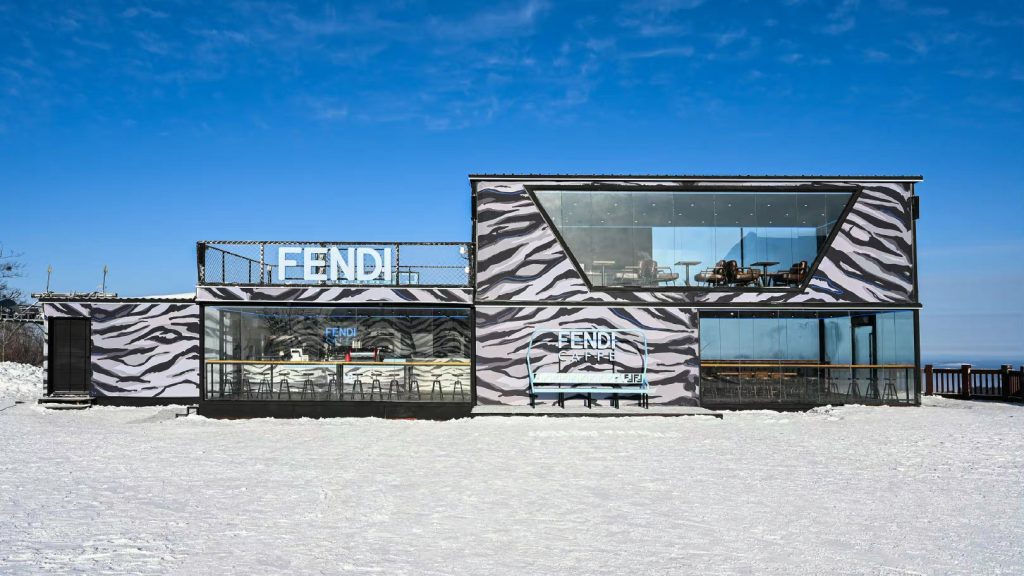 Fendi opened a pop-up café at Changbaishan International Resort from December 2021 to February 2022. Photo: Fendi’s WeiboMoreover, many luxury brands are trying to reach a wider audience by collaborating with local coffee houses, like the pop-up event co-organized by Louis Vuitton and Manner at the Qixi Festival in Sanlitun, Beijing, and the pop-up store of perfume and coffee jointly created by Maison Margiela and Seesaw Coffee. These colorful pop-up events capture the attention of young people. On Xiaohongshu, it’s very common for pictures of coffee mugs with luxury logos to get hundreds or even thousands of likes. 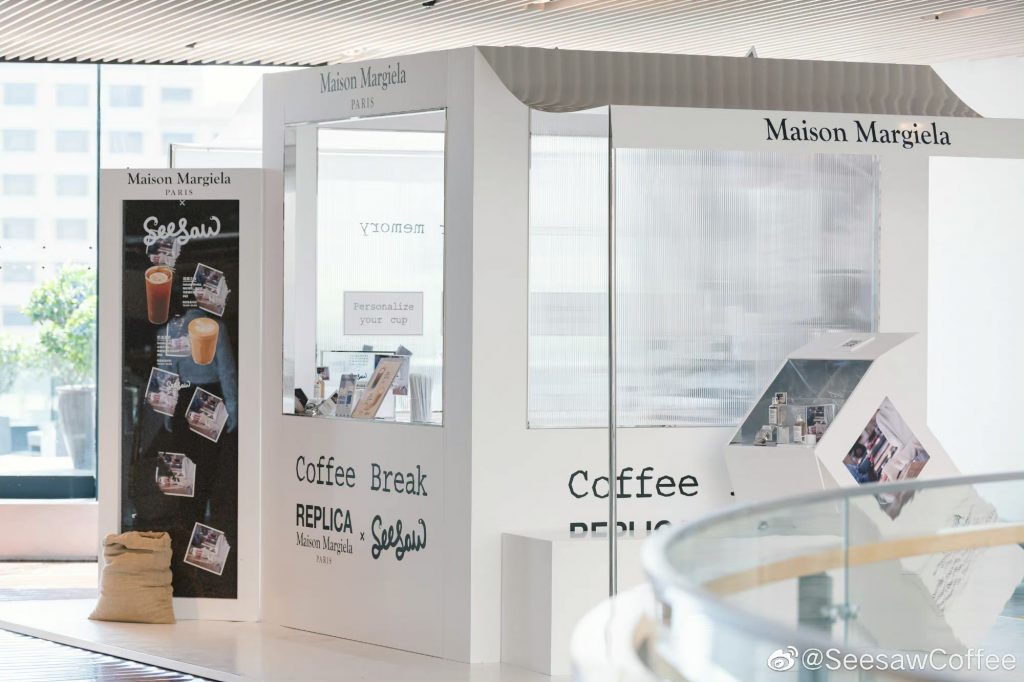 In October 2020, Maison Margiela teamed up with Seesaw Coffee for a pop-up store in Shanghai.“Coffee has become a part of the office culture. Apart from the taste and how it keeps people energetic, coffee represents a kind of consolation when people are working overtime, so the luxury brands are now taking advantage of the image of coffee to become more approachable and emotionally connect with the young white-collars,” said Wu.

Today, Starbucks no longer serves as an important informal public gathering place (at least not in the way it used to), and the attention of the younger generation has been diverted to the endless stream of collaborations. On Xiaohongshu, you can easily get hundreds or even thousands of likes by posting coffee mugs with luxury brand logos. The colorful pop-up activities of luxury brands have attracted the attention of the younger generation, and the luxury value behind the brand has been injected into cup after cup of coffee. By helping young people create rich and fresh social currency, luxury brands can achieve brand communication that keeps pace with the times.

This article is written by or content partner Jing Daily. 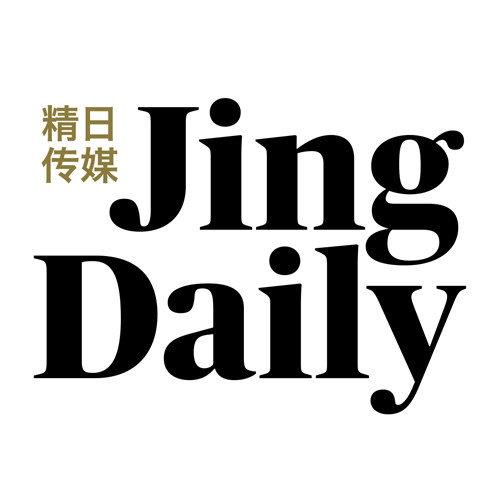 Naomi Wu + FOLLOW
CATEGORIES
FoodTalk
Copyright: unless otherwise stated all contents of this website are ©2022 - REACH24H Consulting Group - All Rights Reserved - For permission to use any content on this site, please contact cleditor@chemlinked.com
EDITOR'S PICK