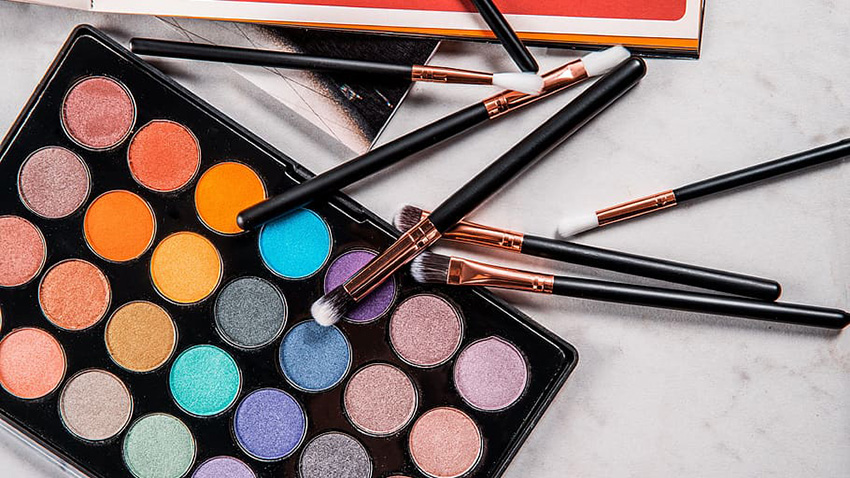 From January to April 2022, the online sales of the skincare and makeup sectors on Ali platforms were on a downward trajectory. In the skincare sector, although international skincare brands still dominated the market, they recorded unpleasant declines in the off-seasons while two Chinese domestic skincare brands, Proya and Winona, kept a steady growth. In the makeup sector, almost all Chinese domestic makeup brands suffered severe sales declines. The beauty sector on the rising Douyin e-commerce platform performed well even in this murky time, but it is dominated by Chinese domestic brands for now.
SHARE

From January to April 2022, the online sales of the skincare and makeup sectors on Ali platforms recorded a decreasing trend. Both sectors went through a murky time.

The skincare sector’s online sales dropped by about 20% in January, but they returned to growth in February, up by 31.51%, mainly attributed to Valentine’s Day promotion and the early promotion of Women’s Day. However, it again recorded negative growth in the following months, primarily due to the rebound of the COVID-19 crisis and massive lockdown in some of big Chinese cities, especially Shanghai.

As a rising e-commerce platform in China, Douyin e-commerce gives brands new opportunities to access more consumers. Douyin’s beauty sector, including skincare and makeup, is still in the fast growth stage. Its year-on-year growth rate even reached 364.53% in January and 191.36% in February, but the lockdown also negatively influenced on Douyin’s beauty sector. Its growth rates dropped below 100% in March and April.

Most skincare brands suffered severe sales decline in this period, but some still achieved good results, such as Chinese domestic brands Proya and Winona. On the one hand, both brands’ products are effective functional skincare products for various groups of consumers. In recent years, Proya actively followed the latest skincare concepts such as “Morning C Night A” (using products containing Vitamin C in the morning while using products with Vitamin A at night) to release a batch of new functional skincare products. This strategy successfully helped the brand gratify consumers’ actual needs and gain more exposure. As for Winona, focusing on sensitive skin (More details on ChemLinked), it is popular among consumers who have skin problems and is even endorsed by many dermatologists. On the other hand, their products are much more affordable than products of high-end skincare brands such as Estee Lauder and Lancome. Consumers tend to purchase products with a high price-performance ratio when the economy is down.

In terms of international brands, Estee Lauder and La Mer still performed excellently in February and March, the big promotion season, but their performance was a little plain in the off-season. Clarins was a new rising high-end international skincare brand in this period and even kept growing in April, which is worthy of attention. 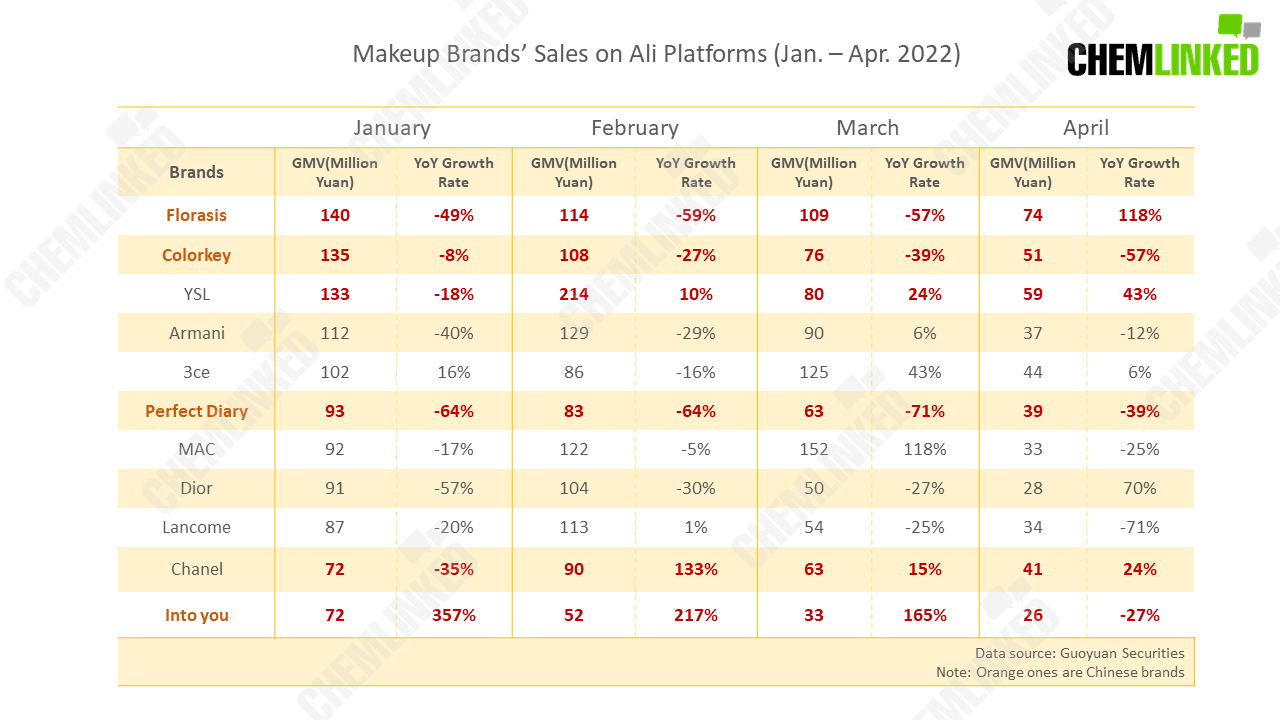 In the makeup sector, almost all Chinese domestic brands recorded huge declines, including Florasis, Colorkey, and Perfect Diary, but one brand was an exception, Into You. This new brand recorded 357%, 127%, and 165% growth rates in the first three months of 2022, but recorded a negative growth rate in April. Whether it will keep popular remains a question since it’s hard to tell a brand’s future only with the data of the first four months in 2022.

Surprisingly, some international makeup brands remained growth in this period, such as YSL and Chanel. 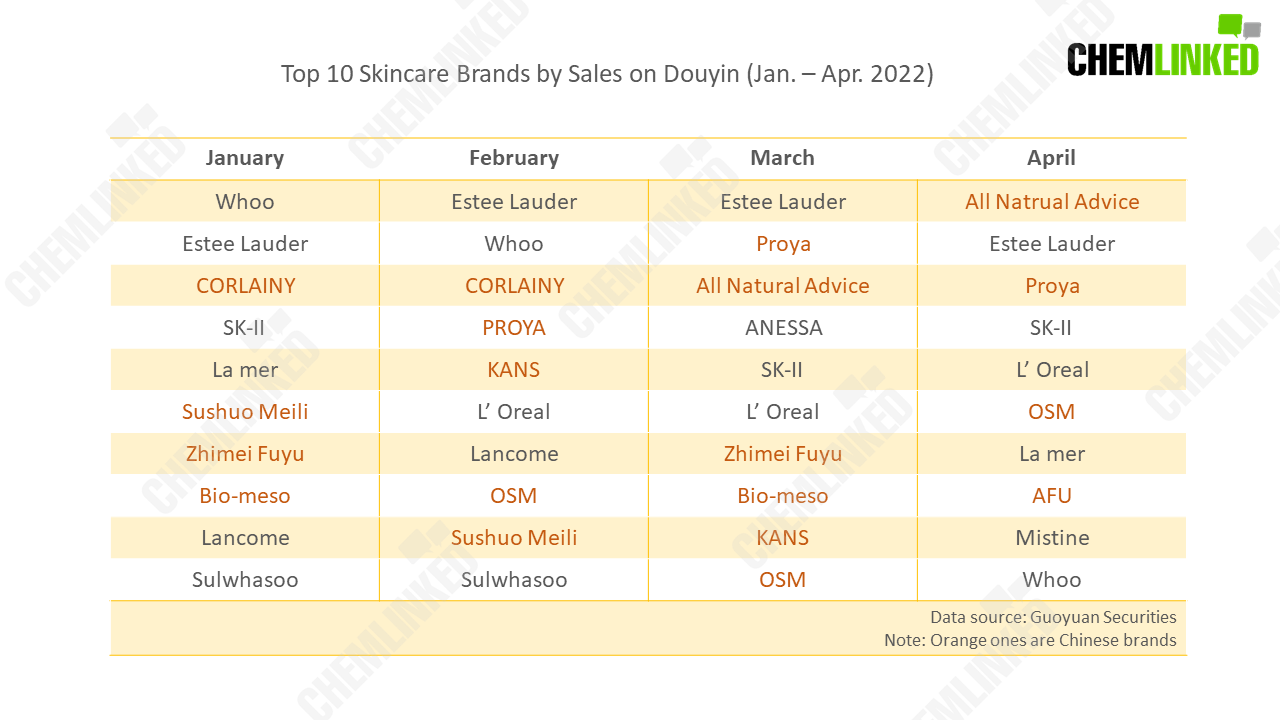 Compared with Ali platforms, where international high-end skincare brands dominate the market, Douyin witnessed the rise of many Chinese domestic skincare brands. They even accounted for 4-6 seats on the Top 10 skincare brands list from January to April. One reason is that many users on Douyin are price-sensitive because they live in low-tier cities and whose disposable income is relatively low. Hence, they are more likely to accept more affordable Chinese domestic products. Another reason is that most international brands have not entered this platform.

Whoo and Sulwhasoo are two Korean brands that are good at following the latest trends. In the past two years, they gained great profit by joining live streaming as pioneers. Today, they are also the first batch of international brands to explore Douyin e-commerce.

Two sunscreen brands, ANESSA and Mistine, rose in March and April when people started to prepare for the coming of summer. 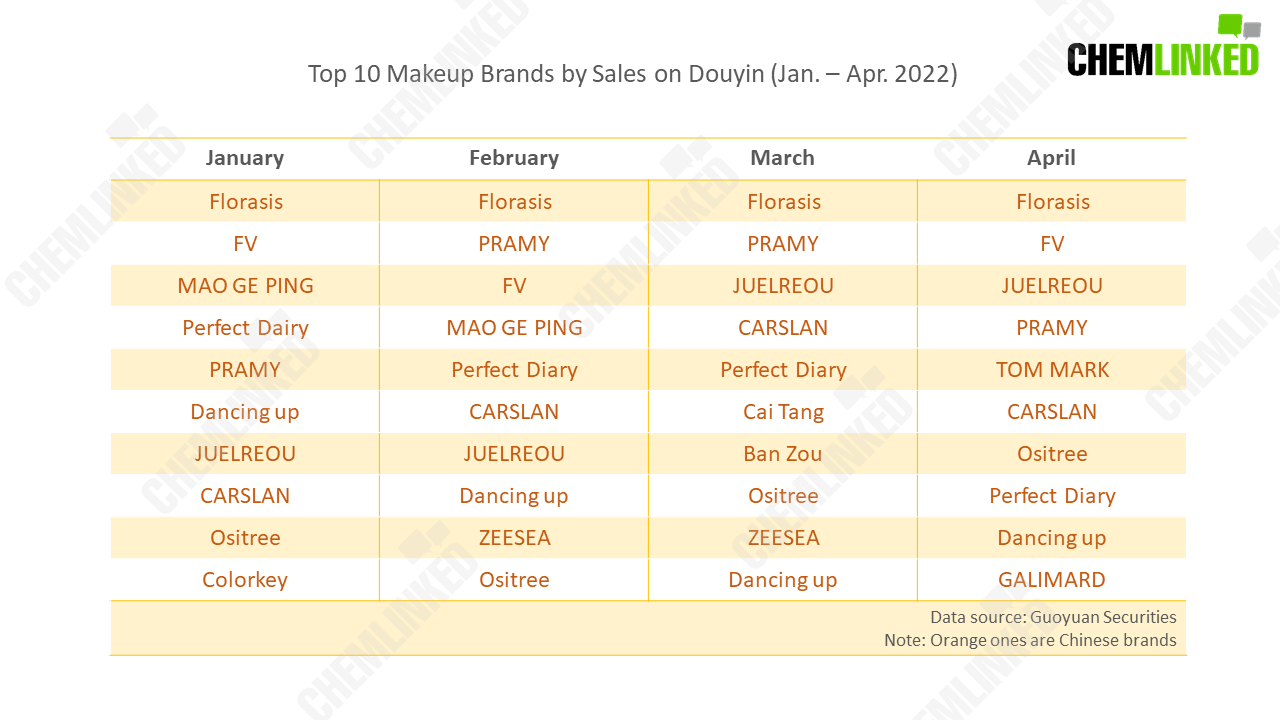 As for makeup brands, Chinese domestic makeup brands have fully dominated the Douyin platform. International brands, such as Armani, Estee Lauder, Givenchy, etc, also have stores on Douyin, but domestic brands outperformed them for now.

Skin microbiome is a rising skincare concept in the market, with brands achieving good sales. Chinese domestic skincare brand Dr. Alva is the representative. From January to April, this brand’s GMV was 189 million yuan, increasing by 42% year on year.